The Hong Kong dollar is the currency of Hong Kong —China's special administrative region— since 1863, when it was first minted by the British Empire. Although five years later it was removed from circulation, the old British colony would have its own currency reintroduced and it is its legal tender today. It is divided into 100 cents.

Origins and history of the Hong Kong dollar.

As Hong Kong was a British colony from 1841 to 1941 (and British overseas territory from 1941 to 1997), the United Kingdom tried to implement a system based on the pound. The plan did not work as the people of Hong Kong were reluctant to use it. Consequently, in 1860 the Hong Kong Mint was established and the Hong Kong dollar was first created. The process started in 1863 and was interrupted 5 years later because the Chinese did not like the coins which resembled the Mexican and Spanish ones, used for 50 years prior to this period.

In 1873 the international silver crisis resulted in a devaluation of the Hong Kong dollar as it was attached to the "gold standard" of the US dollar. Following this depreciation and as a great number of Mexican and Spanish coins were still in circulation, the British Government took part, partly under the pressure of Hong Kong authorities.

The dollars from British trade started to be officially used in Hong Kong. In 1906 several territories belonging to the British Empire started to issue their own currencies. In 1935 silver dollars started to flow out of Hong Kong and China.

As Japan occupied Hong Kong during the Second World War the Japanese yen was imposed as the official currency, but after the war this currency was banned and the Hong Kong dollar was brought back to be later linked to American dollar in 1972. 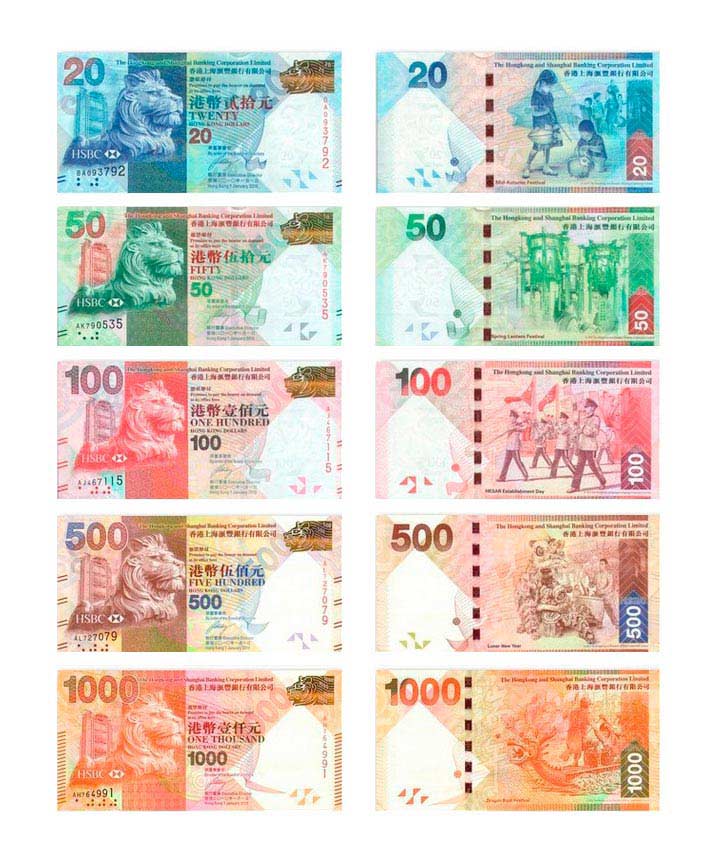 Regarding notes, there are three commercial banks (HSBC, the Standard Chartered Bank and the Bank of China) issuing notes under the supervision of the monetary authority of Hong Kong –its Central Bank. The design and colour vary depending of the denomination. Today there are notes of 10, 20, 50, 100, 500 and 1,000 Hong Kong dollars.